Part of the 2020 Fall series: The Presidential Election and a Nation in Crisis: Polarization, Pandemic, Prejudice
Tuesday, September 1, 2020 at 7 p.m.
Virtual Event 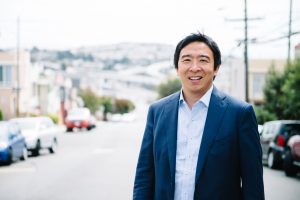 Andrew Yang is an author and entrepreneur who, in 2011, founded Venture for America, a non-profit that created thousands of jobs in Detroit, Cleveland, Pittsburgh, Baltimore, and other cities throughout the country. In his book The War on Normal People, he explains the mounting crisis of the automation of labor and makes the case for the Freedom Dividend, a Universal Basic Income of $1,000 a month for every American, along with hundreds of other policies to put Humanity First. Andrew was named a Presidential Ambassador of Entrepreneurship by the White House under the Obama administration and a Champion of Change for his work with Venture for America. His run for President in 2020 brought a bold vision for a trickle-up economy and the power of investing in American families.