Part of the 2019 Fall series: Discrimination and the Search for Justice and Truth
Wednesday, November 13, 2019 at 7 p.m.
Viking Theater 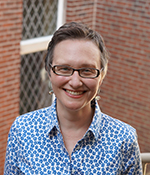 Beth received a Ph.D. in sociology from Harvard University in 2017. She also holds degrees from St. Olaf College in Minnesota (1997) and the University of Oxford (1999 B.A. and 2000 M St. Theology) where she was a Rhodes Scholar.

She is co-editing a volume titled Is Working Longer in the U.S. in Jeopardy?, which gathers an interdisciplinary community of top scholars to examine how the contexts that shape individuals’ likelihood of working longer are changing across cohorts, and how these contexts affect some population groups — especially racial minorities and lower-income workers — more than others. This project has the potential to influence public policies that improve the workplace for older employees and to increase the public’s understanding of aging and labor force challenges.

Beth has a longstanding interest in the relationship between evidence and public policy. She previously contributed to several projects designed to improve the use of evidence in services for children and families in the United Kingdom, and worked on disability policy at the White House Office of Management and Budget.