Religious Diversity, Political Conflict, and the Spirituality of Liberation: The Voice of a Palestinian Christian

In his lecture, Mitri Raheb will present several theses based on the history of the Israeli-Palestinian conflict as well as his personal experience: 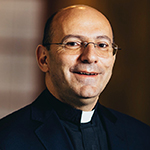 Mitri Raheb is the founder and president of Dar al-Kalima University College of Arts and Culture in Bethlehem in addition to being the senior pastor of Christmas Lutheran Church in Bethlehem. The most widely published Palestinian theologian to date, he is the author of 16 books. His latest book is Faith in the Face of Empire: The Bible through Palestinian Eyes. A social entrepreneur, he has founded several church-related organizations in addition to several other civic initiatives on national, regional, and international levels.

The 50-year-old multilingual contextual theologian received in 2015 the Olof Palme Prize, in 2012 the German Media Prize that is mainly granted to heads of states, in 2003 the prestigious Wittenberg Award from the Luther Center in DC, in 2006 the “International Mohammad Nafi Tschelebi Peace Award” of the Central Islam Archive in Germany, and in 2007 the well-known German Peace Award of Aachen. His work has received wide media attention from major international media outlets and networks including CNN, ABC, CBS, 60 Minutes, BBC, The Economist, Newsweek, Al-Jazeera, Vanity Fair, and others.