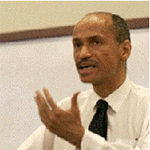 Charles W. Mills is John Evans Professor of Moral and Intellectual Philosophy at Northwestern University. He works in the general area of social and political philosophy, particularly in oppositional political theory as centered on class, gender, and race. In recent years he has been focusing on race. He did his Ph.D. at the University of Toronto, and is the author of numerous articles and book chapters, and five books. His first book, The Racial Contract (Cornell University, 1997), won a Myers Outstanding Book Award for the study of bigotry and human rights in North America. It has been adopted widely in courses across the United States (more than 100 campuses so far), not just in philosophy, but also political science, sociology, anthropology, African-American, and race relations. His second book, Blackness Visible: Essays on Philosophy and Race (Cornell University, 1998), was a finalist for the award for the most important North American work in social philosophy of that year. His fourth book, Contract and Domination (Polity Press, 2007), is co-authored with Carole Pateman, who wrote The Sexual Contract (Stanford University Press, 1988), and it seeks to bring the two “contracts” together. His most recent book is a collection of his Caribbean essays, Radical Theory, Caribbean Reality: Race, Class and Social Domination (University of the West Indies Press, 2010). Before joining Northwestern, Charles Mills taught at the University of Oklahoma and the University of Illinois at Chicago, where he was a UIC Distinguished Professor.