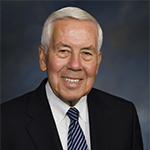 Former United States Senator Richard G. Lugar (IN) is the President of The Lugar Center, a non-profit organization focusing on global food security, WMD nonproliferation, aid effectiveness, and bipartisan governance. Senator Lugar also serves as a Professor of Practice and Distinguished Scholar at the new School of Global and International Studies at Indiana University.

A fifth generation Hoosier who left the United States Senate as the longest serving member of Congress in Indiana history, Senator Lugar is recognized as a gifted local and state leader, as well as a respected national and international statesman. During his tenure in the United States Senate, he exercised leadership on critical issues such as food security, nuclear non-proliferation, energy independence, and free trade. He holds 46 honorary degrees from colleges and universities in 15 states and the District of Columbia, and he was the fourth person ever named Outstanding Legislator by the American Political Science Association. Her Majesty The Queen of England bestowed upon Senator Lugar the rank of honorary Knight Commander of the Most Excellent Order of the British Empire in honor of his work to make the world more secure from weapons of mass destruction and his commitment to the U.S.-U.K. alliance. President Barack Obama named Senator Lugar a recipient of the Presidential Medal of Freedom.

Senator Lugar graduated first in his class at both Shortridge High School in Indianapolis and Denison University in Granville, Ohio. He attended Pembroke College at Oxford University as a Rhodes Scholar, studying politics, philosophy and economics. Lugar volunteered for the U.S. Navy in 1957, ultimately serving as an intelligence briefer for Admiral Arleigh Burke, chief of Naval Operations.