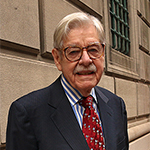 George L. Kelling ’56 is a senior fellow at the Manhattan Institute, a professor in the School of Criminal Justice at Rutgers University, and a fellow at the Kennedy School of Government at Harvard University.

Kelling has practiced social work as a child-care worker and as a probation officer and has administered residential-care programs for aggressive and disturbed youth. In 1972, he began work at the Police Foundation and conducted several large-scale experiments in policing—notably, the Kansas City Preventive Patrol Experiment and the Newark Foot Patrol Experiment. The latter was the source of his contribution, with James Q. Wilson, to his most familiar essay in The Atlantic, “Broken Windows.” During the late 1980s, Kelling developed the order-maintenance policies in the New York City subway that ultimately led to radical crime reductions. Later, he consulted with the New York City Police Department in dealing with, among others, “squeegee men.”