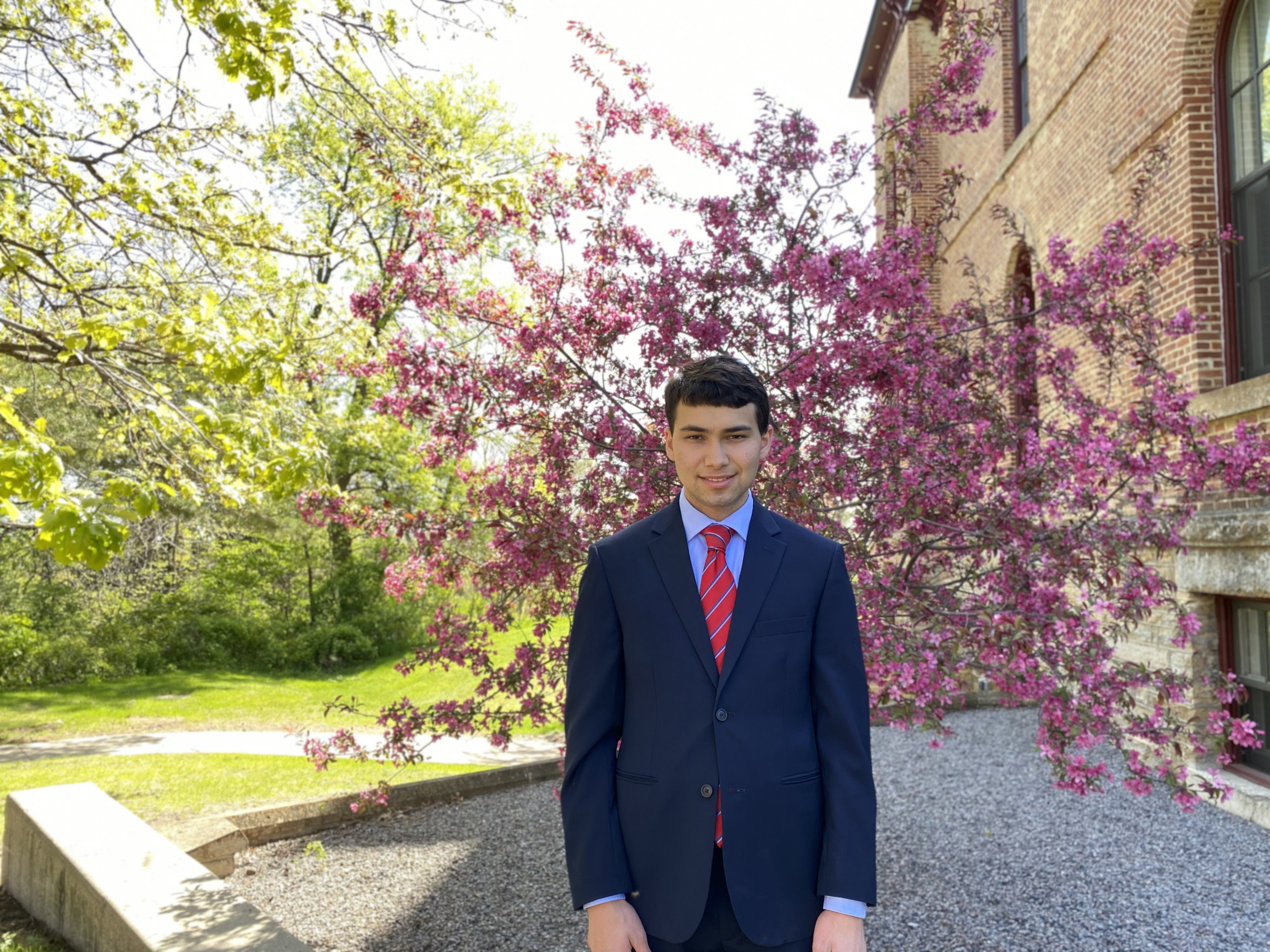 Since the Institute for Freedom & Community (IFC) was established in 2014, the IFC Student Associates have played a big role in keeping events running smoothly, and providing feedback on how to improve future IFC projects and events.

Among the many IFC Student Associates graduating in 2021, Maxwell Rubin has distinguished himself in many ways, but especially by actively participating in our public events and through his unwavering commitment to viewpoint diversity. In an attempt to highlight his work with the IFC and thank him for his time, Maxwell sat down for an interview with Student Associate Jessica Horst ’22, and Assistant Director of the Institute for Freedom and Community Erik Grell ’05.

How did you first get involved with the Institute for Freedom & Community (IFC)?

I should first note that I was enrolled in the Public Affairs Conversation (PACON) my junior year at St. Olaf, and PACON is fully supported by the Institute for Freedom and Community. It was an Institute event with Alice Dreger, however, that ultimately led me to become a student associate with the Institute for Freedom and Community (IFC). That October 2019 conversation between Alice Dreger and Morrison Family Director Edmund Santurri, titled “Truth, Justice and the Science of Gender,” caught my attention for a number of reasons, not least because I found myself ardently disagreeing with Dreger’s more liberal, even progressive, views on gender. Of course, the irony of the Dreger event is that she is a scholar typically attacked by the left-leaning transgender rights supporters who have frequently sought to cancel her. At any rate, after the event I approached Professor Santurri and engaged in a helpful conversation about how to conduct conversations on important topics over which people often find themselves disagreeing. In this sense, the IFC’s mission and its goals really resonated with me. My only regret is that I did not discover the IFC sooner during my time at St. Olaf.

“My only regret is that I did not discover the IFC sooner during my time at St. Olaf.”

Can you talk more about PACON and what you found helpful in that two-course program?

As a first-year student, I enrolled in the American Conversations (AMCON) program at St. Olaf College because I love discussing and learning about the history, culture, and political thought of the United States of America. But I will confess that as a conservative student I struggled in AMCON in part because the conversations among my peers often reflected a one-sided ideological consensus. The same could not be said for my experiences in PACON. In fact, what distinguished PACON in my view from many of the other courses I have taken at St. Olaf was the intentional effort of both the instructors and the students to resist the charm of an echo chamber. The first course in the sequence with Professor Schillinger will always remain my favorite course at St. Olaf, because it gave me greater insight into how our country was made as a result of contested ideals. I think anyone who cares about America and wants to understand it should take a course like this.

“What distinguished PACON in my view from many of the other courses I have taken at St. Olaf was the intentional effort of both the instructors and the students to resist the charm of an echo chamber.”

Viewpoint diversity is the very heart of what it means to be an American. It means competing views can be offered and debated without the unpopular ones being silenced or “cancelled.” For example, during the Constitutional Convention, when small and large states arrived at a stalemate over how to organize a congress in the new federal government, a plan proposed by Connecticut’s delegates to the Constitution, referred to as The Great Compromise, created a dual system of representation with a lower house of proportional representation to population and an upper house where each state would have equal representation regardless of population. It was through debate and dialogue that led the delegates to the Great Compromise. In today’s America, this seems increasingly unlikely. Many in academia seem to forget that America was founded over hard fought debates such as the ones at the Constitutional Convention; debates that continue today, whether it be Israel-Palestine, climate-change solutions, kneeling during the National anthem, or abortion, all require us listen to each other in order to make any headway on understanding each other or finding a solution. College, in many ways, is a primer for what individuals will experience in their professional lives. Shielding students from both sides of a contentious issue defeats the purpose of college and does not prepare students for what comes after. Being able to listen and work with individuals who hold diverse viewpoints can only help make graduates more productive, compassionate, and effective members of society.

“Being able to listen and work with individuals who hold diverse viewpoints can only help make graduates more productive, compassionate, and effective members of society.”

As our world continues to become increasingly divided over political and social issues, what can be done to remain respectful, and open to constructive dialogue? What recommendations do you have for students on St. Olaf’s campus?

As someone who leans conservative on any number of divisive political issues, I believe that listening to people on the other side, especially one-on-one, is the most important way to preserve and promote the civility and increase respect between the left and right. I hope my fellow and future Oles, regardless of whether they have strong political opinions or lack them entirely, listen thoughtfully to each other while trying to avoid making off-the-cuff judgements. Genuine questions and listening are the key to improving constructive dialogue. I also feel that students should stick up more for freedom of speech. As James Madison once noted, “The people shall not be deprived or abridged of their right to speak, to write, or to publish their sentiments; and the freedom of the press, as one of the great bulwarks of liberty, shall be inviolable.” There will never be unanimous agreement on every political, economic, moral, or religious issues. Nor would we want to replace diversity with such strict uniformity. And it is for this reason that speech on important matters over which there is disagreement ought not to be policed.

“There will never be unanimous agreement on every political, economic, moral, or religious issue. Nor would we want to replace diversity with such strict uniformity.”

Established at St. Olaf in 2014, the Institute for Freedom and Community encourages free inquiry and meaningful debate of important political and social issues among students, faculty, and the general public. To that end, the Institute sponsors a range of programming opportunities, in addition to a fall and spring lecture series, to further cultivate civil discourse within the context of the liberal arts.