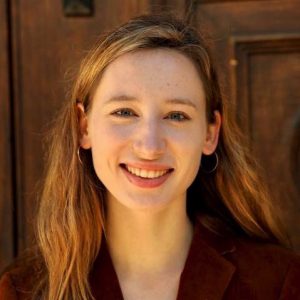 St. Olaf College alumnus Gabrielle Simeck ’18 is beginning Law School this fall at the University of Michigan, and spent the last two years working in Washington D.C. at the Government Accountability Project.

As part of the IFC Alumni Conversations series, which highlights alumni whose work aligns with the Institute’s mission, Gabrielle sat down for a conversation with Student Associate Nathaniel Snedeker ’22, and Assistant Director of the Institute for Freedom and Community Erik Grell ’05.

During your time at St Olaf, you were enrolled in the Public Affairs Conversation Program (PACON), an academic program supported by the Institute for Freedom and Community. PACON includes two courses: the first focused on normative perspectives and the second on the empirical reality of different salient political debates. What was it that appealed to you about this two-course program? Can you talk about your experiences in these courses?

My decision to enroll in PACON was highly motivated by the 2016 election and my experiences living abroad in 2017. I lived with a French host mother and participated in dialogue training through the St. Olaf Peace Scholars program, and, as a result, spent months discussing the impacts of American politics around the world with students and professors from many different countries.

With these conversations in my head, I felt deeply compelled to become better equipped to understand and take action in a domestic context when I returned to the U.S.

PACON seemed like a unique environment to do this: the two-semester course brought together students from all different disciplinary backgrounds from political science to the hard sciences to consider the normative and empirical frameworks of American politics.

The second course was particularly illuminating because many of the assignments and readings required me to emulate and consider multiple perspectives on a given political issue. As a political science major, I had strong opinions about different political issues but was not in the habit of identifying and engaging with the limitations of the perspective I naturally agreed with.

This course allowed me to grapple with the limitations to my perspective and concede potential strengths of other viewpoints.

The fact that PACON students came from all different majors helped enrich these discussions as well; one example being discussions about universal healthcare. Pre-med students, economics majors, and political sci folks all brought different points to the table, and I gained new insight into how necessary interdisciplinary problem-solving is to public debate.

You spent your junior year abroad in France and in Norway. What perspectives did living in Europe offer you on political affairs in the United States?

My experiences abroad both shifted and deepened my commitments to political action and advocacy. My host mom and I bonded over conversations about politics, and I spent a lot of time consuming French media. I lived there during the 2017 Presidential election, and I was struck by how drastically different the political platforms were from U.S. parties, both in substance and tone.

Things that would have created enormous political gridlock in the U.S. like universal healthcare and social safety net protections were taken for granted in France. These experiences revealed the constraints that restricted my awareness and challenged my understanding of what public policy and legislation could achieve.

My experience in Norway also challenged my perspective. For the first week of the two-month Peace Scholars program, I trained under Steinar Bryn at the Nansen Center for Peace and Dialogue in Lillehammer, Norway. There I took part in an abridged 6-day version of the months-long dialogues Bryn had facilitated between different groups engaged in conflict beginning in the 1990s. He was later nominated for the Nobel Peace Prize six times for his work in the Balkans.

Along with around 30 students and professionals from Russia, various countries in the Balkans, Ukraine, U.S., and Western Europe, I learned the basics of dialogue and walked through the steps many others had taken before us. We started not knowing a thing about each other and ended the week incredibly close.

Steinar believed that by spending time together, over meals, conversations, and even a walk down the ski jump used in the 1994 Olympics, we would develop the trust and care to be truly honest and to listen deeply during dialogue.

On day four, we spent time in regional groups talking about the conflicts between our regions. Enormous vulnerability came out of the trust we developed. One woman from the Balkans asked the American group, “Do you know what your country has done to mine?” She had lived through 1999 NATO bombing of Serbia, an event I learned about in high school as a justified intervention to end the violence in the Balkans. I have never forgotten this moment; it revealed to me that the history I was taught was a circumscribed one.

I returned home more aware than ever of the consequences of American foreign policy. In the fall, I would start PACON with the strong sense that I needed to better educate myself about domestic politics.

After dialogue training, I wanted to talk with people with whom I disagreed, understand our value system differences, and engage with critical, divisive issues.

The Institute for Freedom and Community’s fall speakers series is entitled “The Presidential Election and a Nation in Crisis: Polarization, Pandemic, Prejudice.” As a recent Ole graduate with a strong interest in public affairs, what is your take on what is happening to dialogue in this country right now?

Right now, I think there is an incredible need for dialogue, and at the same time dialogue is highly fragmented.

As the speaker series’ title captures, the US is struggling with multiple overlapping crises. The Covid-19 pandemic continues to threaten and take lives, disproportionately in communities of color, while massive protests following the murder of George Floyd have brought attention once again to systemic racism and police brutality.

To me, dialogue needs to be a part of grappling with these intersecting problems, but different barriers like misinformation, racism, prejudice, and polarization can too easily impede efforts to begin and sustain dialogue.

The fact that the US is still struggling to contain the pandemic, while other countries have effectively controlled cases numbers, is one indication of the fragmented status of dialogue.

While I think there are very real challenges to dialogue at the present time, I find myself thinking about a story Steinar shared during dialogue training. In an early dialogue session, he brought two dialogue groups together and encouraged them to start talking about the conflict between them. But no one was willing to listen. Instead, people began interrupting each other and arguing. Steinar cut off the structured dialogue and tabled difficult discussions until after people spent some time talking about their daily lives. The second time around, the participants were more willing to be honest, trusting, and patient, even as they discussed the trauma and conflict they experienced.

The lesson I took away was that people need to trust each other and recognize each other’s humanity for dialogue to be effective.

The trust doesn’t come from a shared perspective or opinion or mean that dialogue will be comfortable. Instead, it is more of a precondition for the vulnerability that dialogue needs to be sustainable.

There are legitimate challenges to dialogue in the US right now. But I think fostering trust and recognition is an important first step to beginning and sustaining tough conversations.

When I was a first year at St. Olaf, I was preoccupied with the idea of a linear path to a vocation. I knew I was interested in political science and dialogue, and the typical trajectory for those interests tends to be law school.

But I would encourage first years to let go of a premature focus on a particular path and instead try a lot of different things. College clubs, internships, and student government all ended up being tools of discernment for me. In the four years I was at St. Olaf,  I worked as a field intern for the Clinton campaign in Iowa, participated in the 2016 New Hampshire Primary Interim class, did donor research for a congressional campaign, and participated in the Honor Council.

These experiences allowed me to identify my strengths and activities that resonated with me. Perhaps the best piece of advice I could offer Oles is to avoid seeking a linear path, pursue different experiences, and just get involved.

What are your plans for the future and how did experiences at St Olaf College, and more specifically your involvement with both PACON and the Institute for Freedom and Community, help prepare you for the road ahead?

After I graduated in 2018, I worked as a communications associate at a legal non-profit that represents whistleblowers. This fall, I will start my first year at the University of Michigan Law School.

Applying to law school was a daunting and difficult process, but St. Olaf helped me develop my writing and critical thinking skills and helped me understand and articulate why I wanted to go in the first place. PACON specifically helped me identify my interest in understanding how to construct and evaluate arguments and weigh different viewpoints.

I know that law school will be a challenging three years. My memories and experiences at St. Olaf have helped me feel confident in my choice to pursue this next step and will help me thrive once I start.

Established at St. Olaf in 2014, the Institute for Freedom and Community encourages free inquiry and meaningful debate of important political and social issues among students, faculty, and the general public. To that end, the Institute sponsors a range of programming opportunities, in addition to a fall and spring lecture series, to further cultivate civil discourse within the context of the liberal arts.